Home Archives Profile
FREE GIFT -- print out a free $25 gift certificate for a free class on visioning & vision board creation from best-selling author Joyce Schwarz FREE GIVE IT TO A FRIEND OR YOURSELF
LARGEST BOOK LAUNCH PARTY EVER ONLINE FINAL AGENDA FEATURES 22 TOP EXPERTS & WISDOM LEADERS FOR THE VISION BOARD BOOK http://tinyurl.com/ordervisionbook

New Years Resolutions DON'T WORK, Joyce Schwarz, motivational speaker and best-selling author explains why and tells you what does work for visioning your best year ever in 2010 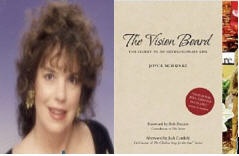 Do you know the best way to turn your New Year resolutions into reality?

According to best-selling author and motivational speaker Joyce Schwarz the best way is to create a visual map for 2010 by designing your own vision board as seen on Oprah and Larry King. In THE VISION BOARD (Collins Design; December 22, 2009; $18.99), Call for interview 310-822-3119 or email: joyceschwarz@gmail.com


Create a visual map for 2010 by designing your own vision board as seen on Oprah and Larry King,says Joyce Schwarz motivational speaker and author of THE VISION BOARD: the secret to an extraordinary life (Collins Design; December 22, 2009; $18.99) Schwarz shows her career strategy clients how to picture success instead of just dreaming about it. She can share this with your readers, viewers and listeners!

In this trade paperback version December 22, 2009, of THE VISION BOARD—the #1 mystical bestseller on Amazon—career strategist Joyce Schwarz introduces readers to GRABS, her five-step system to living the life of your dreams. "GRAB life Schwarz advises -- don't wait for mumbo jumbo and magical thinking to wave a wand! Start with Gratitude and keep the circle of prosperity and abundance in action by sharing this holiday season! "

The Vision Board has sold 20,000 hard back copies and moves to trade paperback on 12/22/09 and will be available at more than 6,000 bookstores across USA and Canada!

The official site for the book is www.ihaveavision.org

THE VISION BOARD book shows you how to:

• To find more love and spice up your sex life by designing a couple’s vision board.

• To get the job of your dreams or start your own business.

• To tap into the power of an ancient ritual called visioning like Jim Carrey did to make $20 million and more.

FEATURING CELEBRITY AND VIPS INCLUDING:

Plus interviews, tips and tales about visioning success from such celebrities like Jim Carrey, Bob Proctor (who wrote the foreword), Jack Canfield, co-author The Chicken Soup for the Soul series (who wrote the afterword) and romance novelist Jina Bacarr · PLUS more than 75 other wisdom leaders, celebrities and real people like you and me!

Schwarz has logged more than 50,000 hours of CEO-level coaching. She has spoken to more than 200,000 people at more than 500 public seminars, keynoted at more than 100 conferences including the Consumer Electronics Show and National Assn of Broadcasters (NAB) and Digital Hollywood and conducted workshops at Learning Annexes in Los Angeles, San Francisco, and San Diego.
She has moderated and organized corporate retreats for clients like AT&T and Sheraton Hotels.

She also heads JCOM a new media consulting and launch strategy firm located in Marina Del Rey, California and has served as a launch strategist for more than 75 venture funded start-ups including emusic.com. She launched the Missing Kids on the Milk Carton campaign and AOL’s Workplace of the Future. Joyce was the co-recipient of an NEA grant for her community outreach programs. She is originally from Cleveland, Ohio and holds an undergraduate degreefrom Ohio University and a masters degree from the University of Southern California.

The comments to this entry are closed.